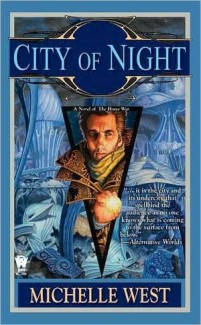 Book Two of The House War
by Michelle West

CITY OF NIGHT is the second novel in The House War, the story Michelle West’s avid fans have been waiting to read for over a decade. In 1995, Michelle opened the way to a rich new fantasy universe with her Sacred Hunt duology, which brought readers from the insular kingdom of the Hunter Lords and their...

CITY OF NIGHT is the second novel in The House War, the story Michelle West’s avid fans have been waiting to read for over a decade. In 1995, Michelle opened the way to a rich new fantasy universe with her Sacred Hunt duology, which brought readers from the insular kingdom of the Hunter Lords and their Hunt Brothers to the much broader land­scape of the Essalieyan Empire, a realm with a long and bloody history, a kingdom ruled by the Twin Kings, them­selves the sons of gods. It is also controlled by The Ten, the heads of the most influ­en­tial Houses in Aver­alaan, the capital of the Empire.

The House War is the tale of the battle to control the most powerful of the ruling Houses in the Essalieyan Empire – House Terafin. But it is also the story of Jewel Markess (Jay to her friends).The Hidden City, the first volume of The House War, intro­duced us to the orphaned Jewel, rescued from a precar­ious exis­tence in the slums of Aver­alaan by Rath, a man who turned away from his own family long years ago when his sister left home to join House Terafin. Now Rath’s sister is The Terafin, head of House Terafin, while Rath has become a recluse, seeking and selling the valu­able relics he finds amid the ruins of the ancient and deserted under­city that lies below the popu­lous streets of the Aver­alaan holdings.

When Rath takes the orphaned Jay into his home, he reveals to her the myste­rious under­city and its trea­sures. And then Jay begins to rescue other chil­dren – creating a den of her own – and they too begin to mine the under­city for items that can be converted to coin.

As City of Night opens, times have become even more desperate within Averalaan’s hundred hold­ings. Street chil­dren have been disap­pearing, theft and violence have increased, and even Jewel and her den are finding it hard to make ends meet.

Though they have been living on their own for some time, Rath has remained their mentor and has continued to sell the items of value they find in the under­city. Then suddenly Rath orders them to avoid the under­city as much as possible. He himself has obvi­ously become involved in some­thing extremely dangerous. Yet Rath refuses to heed the warn­ings that Jewel’s seer dreams have given her. For he has learned a bitter truth about Averalaan’s under­city and the demonic activity that is esca­lating both there and in the mortal, surface level city as the worship­pers and demonic servants of the Lord of the Hells strive to complete a ritual that will return their god to the mortal realm.

Rath now joins with the mages of the Order of Knowl­edge to wage a secret battle against this nearly unstop­pable foe. He knows that his choice will see him targeted for death – or a far worse fate. In a last-ditch attempt to protect Jewel and her den-kin from what lies ahead, he provides them with a note of intro­duc­tion to the head of House Terafin – the sister he’d sworn never to contact.

For only within the well-guarded walls of the Terafin manse will Jewel and her comrades stand any chance of escaping the unnat­ural forces reaching out to claim them….

Other books in The House War