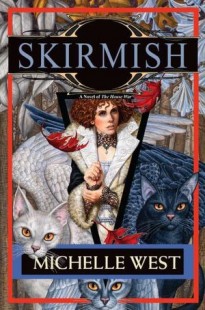 Book Four of The House War
by Michelle West

Skir­mish is the fourth novel in the long-awaited House War series. Set in the same rich fantasy universe as Michelle West’s Sacred Hunt duo logy and her six-volume Sun Sword series, the House War novels recount the events leading to the momen­tous battle between the demonic minions of the Lord of the Hells and the defenders of the Essalieyan Empire — a realm with a long and bloody history. The empire is ruled by the Twin Kings, sons of the gods. It is also controlled by The Ten, the heads of the most influ­en­tial Houses in Aver­alaan, the capital of the Empire.

But The House War focuses not only on the larger war but also, and more impor­tantly, on the campaign to control the most powerful of the ruling Houses in the Essalieyan Empire – House Terafin.

As Skir­mish opens, Amarais ATer­afin – The Terafin – lies dead, assas­si­nated by a demon at the very moment that Jewel ATer­afin returns from the war in the South, appearing as if out of thin air, having trav­eled by hidden paths. Jewel is accom­pa­nied by her domicis Avandar, known as the Warlord, by Lord Celle­riant of the Winter Queen’s court, and she rides on the back of a giant stag – the Winter King. Yet still she cannot arrive in time to save her leader, but only in time for Celle­riant to slay the demon assassin.

Jewel returns to a city beset by a myste­rious “sleeping sick­ness” for which there appears to be no cure. Only one healer – a young man who shel­ters with Jewel’s den – can temporarily wake the sleepers so they make take enough suste­nance to survive. And the sick­ness continues to spread unchecked. As the Empire strives to combat this insid­ious disease, and stave of demonic attacks, House Terafin begins prepa­ra­tions for the funeral of its Lord. And four members of the House declare them­selves as candi­dates to claim the House Seat, ready to do what­ever it takes to wrest control.

Only Jewel remains silent, though she is the heir secretly desig­nated by Amarais before her depar­ture to the South. While some seek to intim­i­date Jewel or recruit her for their own bids, others begin to gather around her: her own den, the most loyal of House Terafin’s Chosen, Haval the dress­maker, powerful magi, and three myste­rious ‘winged cats’ who come to her in the midst of a deadly encounter in a forest not meant for mortals to walk….

Jewel is deter­mined not to make any deci­sions before the Terafin is laid to rest. But as the enemies of House and Empire mobi­lize, it becomes terri­fy­ingly clear that everyone – including Jewel and her other­worldly allies – must survive the three days of the funeral rites before they can even be certain that there will be a House Terafin left to fight over….

Other books in The House War