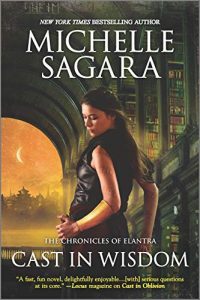 January 28, 2020 is book day for Cast in Wisdom, the chron­i­cles of Kaylin Neya’s life as a police officer in the city of Elantra.

I’ve written, or attempted to write, the following para­graphs multiple times since I reached my computer, but… I always ending up heading to spoiler terri­tory and have to back up and try again.

So: there’s some­thing in the book that moves toward changes that I other­wise can’t speak about on a book’s release day T_T but I’m excited to have you read it!

In other news: In the way of writers, the book that has been tormenting me is not Cast in Wisdom. Because I failed to take a step and land on my foot, the revi­sion for the next novel — The Emper­or’s Wolves — has only just been turned in, weeks late (yesterday, in fact). My arm, however, is almost fully healed, and I can type without constraint.