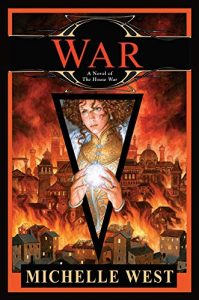 ETA: It’s come to my atten­tion else­where on-line that some readers think WAR is the final book in the Essalieyan universe. They are… not happy with it because of all the things the book isn’t. I forget, because I live too much inside my own head, that what I’ve known for years – and talked about for the same years – simply isn’t known by everyone who is… not me.

War is the final book in the House War series, the culmi­na­tion of the Aver­alaan arc. The time between it and the penul­ti­mate volume has only been four months, so I’m not nervous about the timing or the long wait between books (which char­ac­ter­ized my nerves about First­born). No, I’m just nervous because it’s the final volume. You know how you can bounce of ceil­ings because you are excited and nervous and you can’t sit still and your grasp of actual sentences is trun­cated because you can’t finish one? Like that. I’m excited. And nervous. There are prob­ably going to be skull marks in the ceiling by the end of the day.

Amazon and B&N have both added WAR to the list of notable SF&F books being published in June.

DAW’s hard­cover is avail­able in North America, and in any Amazon that imports books from North Amer­ican publishers; the ebooks are avail­able on Amazon, Kobo and iTunes in the wider world.

If you want  signed copies of the hard­cover, they will be avail­able from the book­store at which I still work part-time – but it’s in Canada, and the ship­ping costs aren’t subsi­dized in any way, so, no media mail, etc. Sorry >.<.