I’ve been given permis­sion to post or reveal this: The cover for the upcoming Severn novel, The Emper­or’s Wolves. I love it! I really, really wanted to share it here. Kath­leen Oudit, the art director, and Shane Reben­schied the artist, did a fabu­lous job! 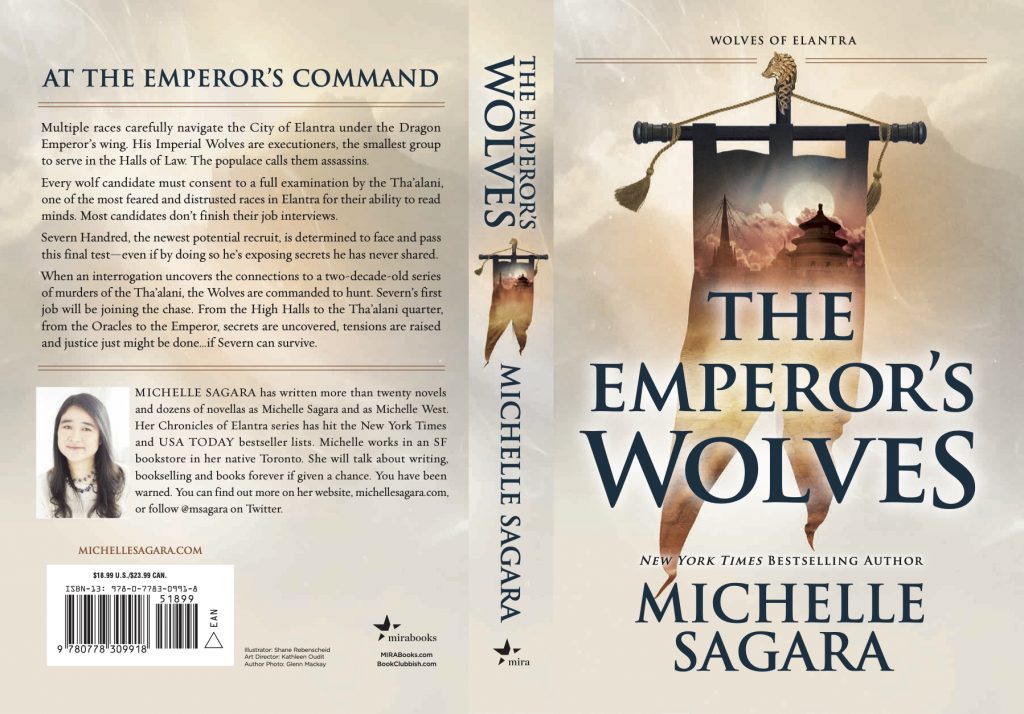 Below is the back cover text, which I will attempt to post with covers from now on.

AT THE EMPEROR’S COMMAND

Multiple races care­fully navi­gate the City of Elantra under the Dragon Emperor’s wing. His Impe­rial Wolves are execu­tioners, the smallest group to serve in the Halls of Law. The popu­lace calls them assassins.

Every wolf candi­date must consent to a full exam­i­na­tion by the Tha’alani, one of the most feared and distrusted races in Elantra for their ability to read minds. Most candi­dates don’t finish their job interviews.
Severn Handred, the newest poten­tial recruit, is deter­mined to face and pass this final test — even if by doing so he’s exposing secrets he has never shared.

When an inter­ro­ga­tion uncovers the connec­tions to a two-decade-old series of murders of the Tha’alani, the Wolves are commanded to hunt. Severn’s first job will be joining the chase. From the High Halls to the Tha’alani quarter, from the Oracles to the Emperor, secrets are uncov­ered, tensions are raised and justice just might be done…if Severn can survive.

ETA: Name of art director, name of artist. Really, I should not post anything until I’m fully awake. Excite­ment does not guar­antee competence >.<

38 Responses to Cover: The Emperor’s Wolves