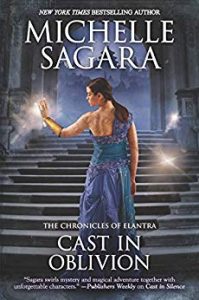 It’s pub day for Cast in Oblivion. Print books are in stores in North America – and prob­ably in specialty SF/F stores in the UK and Australia.

The audio­books appear to be avail­able every­where.

The ebooks appear to be avail­able every­where but Australia/NZ. Anything that can be done from here is being done — I’m really, really sorry because I honestly love my Australian fans T_T.

To cele­brate this, I have commis­sioned a map. If you look at the menu bar, there’s a new tab, MAPS, and the drop down has the map for the City of Elantra, done by Mati Demers.

(Where by cele­brate, I mean that I real­ized I actu­ally needed a bit of a visual guide after all this time, because I am terrible at mapping, and at reading maps. I am one of those adults who, if they must make sense of a map, must orient it so that the street that I’m standing on is also in the direc­tion I’m facing, which frequently means the map is upside down to other people. This causes some confu­sion. My orien­ta­tion, in the world, is Right-Left. I know most people prefer actual compass direc­tions, but… they don’t trans­late well for me. Sadly. All of my maps of Elantra have been word maps – indi­cating where places are in rela­tion to other places. In a wiki.)

ETA: Mati Demers has offered to sell print maps to people who are inter­ested.