Today is release day for The Emper­or’s Wolves. 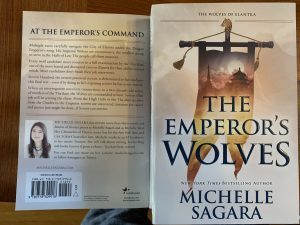 As of today, the book should be avail­able in print, audio and ebook.

I love the cover. I love one small element in the print version – not the title page, but the blank page that follows a title page – it’s not entirely blank.

Three years ago, give or take a few months, I was one of the authors featured at the pixel project. One of the things I offered to encourage dona­tion was a short story prompt. I was willing to write about either a familiar char­acter, or a single word prompt — like, say, Dragon. The person who donated could choose.

The person chose Severn. So I sat down to write a short story. Or rather, a novella. If I mirac­u­lously ended up with a short story, I’d be fine, but I didn’t really think that was likely; I thought I’d end up with a novella.

The donor had to wait. She waited with angelic patience until I had both time and inspi­ra­tion between all the other dead­lines, and I finally sat down, with a clear end-goal in mind, and began to write.

…and reached Chapter Seven, at the end of which it was pretty clear that I had pushed the bounds of novella. I had a choice: I could try to cut it back and tie it up, or I could continue to write toward the end I hadn’t reached yet. Which meant I had a novel. Which meant I couldn’t just try to fit it into the writing schedule. And it also meant that I had to submit it to Mira, home of the Cast novels, because of the option clause. When I first started writing for Luna, the one thing – the only thing – that was consid­ered neces­sary was: female protagonist.

The crite­rion, however, had disap­peared between the first Cast novel and now, and Mira did want the Severn novel. (Once I finished it, I sent it to the donor, so she saw the submis­sion version, which is a bit different, espe­cially at the begin­ning). Which meant, years after I’d committed to write a short story about Severn, I had finally fulfilled that dona­tion pledge. T_T. And honestly, she was great about the time it took and the fact that it was getting farther and farther away from the charity drive. I was less fine because it was an oblig­a­tion I couldn’t fulfill immediately.

And now, the book is real, it is done, and I’m excited to be able to send it off into the world!

If you’ve read The Emper­or’s Wolves already, I ask you not to post spoilers on this page – I will start a spoiler thread post that readers can entirely avoid until they’ve read the book later.