State of the Author, April 2022 edition: I have news

I have spent the last day doing my taxes (in Canada, the dead­line is the end of April. Except appar­ently when that falls on a weekend, in which case it’s the first Monday after the 30th). 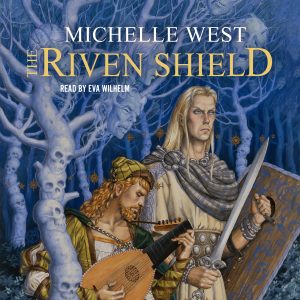 But, I have bits and pieces of news. My new editor is Leah Mol, new to the Mira team. Like me, she’s a Toron­tonian, so I got to meet her in person. I am feeling vastly more comfort­able now.

First: I have been invited to be a Guest of Honor at the UK’s East­ercon in 2024, which will take place in Telford, between the 29th of March and the 1st of April.

Second: The audio­book for Riven Shield is now avail­able.  It’s narrated by Eva Wilhelm, as all the West novels are, and (some) of the links to audio­book venues are on the book page.

Third: I have sold the rights to two more novels set in the Cast universe to Mira Books. Cast in Eter­nity has been finished — for now — and submitted to my editor; my next novel is a Cast adja­cent book that takes place in the Acad­emia — or as I call it, the Magic School book. This idea was suggested by a Twitter reader. Or rather, he asked if I could maybe write more about Robin from Cast in Wisdom. A novella, maybe?

As my single Severn novella had become two novels, I…said no, because at that time I owed 2 Severn novels and two Cast novels, and had zero time or brain space for anything else.

He then said, “It’s just that I have a weak­ness for Magic School novels.”

And Michelle’s brain said: wait, waaaaaaaait. I have a Dragon chan­cellor. I have Barrani students — and two members of the cohort. I have library space. I…have a magic school! And I have Robin’s as yet unwritten friend, and and and…

But I had to shelve this, although my brain was firing on all cylin­ders, because I had four books to write. So that’s the book I’ll be working on, bar unfore­seen difficulties.

It’s been a more than hectic April. I spend much of it doing my least favorite writing activity: revising to cut words. I missed my target. I wrote West words, and deleted West words, and wrote more West words which I’m keeping.

I did my taxes. I feel as if I’ve been doing my taxes for eter­nity, and it was only three days.

You know that feeling you have when you think you meant to say some­thing and you can’t remember what it was? I have that. I’m looking at this post certain that I’ve forgotten something >.<.

39 Responses to State of the Author, April 2022 edition: I have news