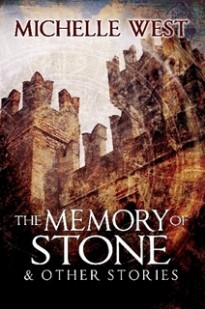 Memory of Stone and Other Stories

It's been a while since I promised a print version of the six Essalieyan short stories. I'm really sorry it's taken this long; the entire process gave me a whole new appreciation for what publishers actually do. But: it's finally available!

In the Hunter Kingdom of the Breo­dani, the golden-eyed son of Bredan is born to the Lord and Lady of Maubreche. In their lands, at the heart of the Maubreche gardens, a living tapestry, carved across the Maubreche hedge-maze, is about to reach its end with the boy’s birth. But Stephen is a Hunter Lord by birth, and he must find a hunt­brother and make the oaths to his god in prepa­ra­tion for the future war that waits him — if he survives.

In the Free Town of Durant, Cessaly, the daughter of a farmer and his wife, hears the voices of wood, stone, metal and fire; she works in their language, creating small items – and large – as if those voices contain a story only she can tell. She is maker­born — but more, she is the most signif­i­cant maker born in a generation.

In the fabled Reach of the Guild of the Maker­born, in the heart of the Empire of Essalieyan, the Artisan who now rules the Maker’s Guild is about to meet an appren­tice he will envy, resent and grow to love as the shadows that grow over the whole of the Empire — and the King­doms beyond — promise war, cata­clysm and death.

Their stories are here in two novellas, Hunt­brother and The Memory of Stone, along with four addi­tional short stories. This is the first time all six of the Essalieyan-related short fiction has been collected in one place.

At the moment, it’s only avail­able at Lulu​.com, but in the next 6 — 8 weeks, it will become avail­able for order on-line, and I’ll add links as they become relevant.

Other books in Short Stories